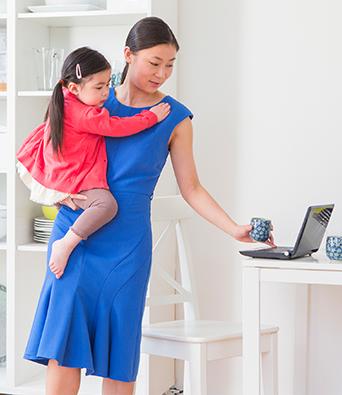 In the early years of family life when couples are faced with juggling work with childcare for their young children, the decision whether or not both parents should work – and just how many hours they work – can be a difficult one.

According to the latest AMP.NATSEM Income and Wealth report, ‘Cost of Kids’, the ‘who should work’ decision is especially tough for parents with pre-school aged children, thanks to the high cost of child care and the impact of work on income-tested government support.

The cost of childcare

The report, which looks at the overall cost of raising children in Australia, says the cost of childcare could be around $8-$10 per hour, and sometimes even higher in cities such as Sydney and Melbourne. For a full day of child care, this can amount to at least $140 per day per child before government assistance.

The amount of government benefits Australian families receive diminishes the more hours both parents work. The report shows a stay at home parent of two children, whose partner works full time on a gross salary of $70,000 per annum, would receive just under $15,000 in government benefits.

However, in this example, if the stay at home parent worked 19 hours a week in part-time employment they would gain a disposable income of around $28,000 per annum (after income tax, child care fees for two children and loss of government family payments).  This means they are working for an average hourly wage of just $14.20 at an effective tax rate of 60 per cent, according to the report.

The AMP.NATSEM report shows the scenario generally worsens the more hours a second parent works. For example, if the secondary earner in this example family was to move from part-time to full-time work, their net disposable income, from a gross income of $70,000, would be only $32,345 per annum.  This takes into account child care and loss of family benefits (equal to a tax rate of 75 per cent). In fact, the report reveals the last five hours of work in a 38-hour week would actually reduce their take-home pay if they are the secondary income earner in the family.

Parents need to think very carefully about the financial implications of a return to work, especially while their children are still young. Not only is there the price and type of childcare to consider, but parents also need to weigh up the trade-off between income levels and the government benefits.

Should you return to work after kids?

Of course, there any many career and emotional reasons to consider when thinking about a return to work.  The report reminds us that, extended periods out of the workforce can be a career killer, particularly for people working in highly skilled occupations. Maintaining skills and keeping up with ever-changing technology in the workplace can mean many families are willing to take a small time income hit for a longer term employment prospects.

Raising children can be one of the greatest investments people make and weighing up whether or not both parents should work, especially in the early year, needs careful consideration. Planning ahead when starting a family is important and a professional financial planner can help with the process of building wealth and securing a solid financial future for parents and their children.